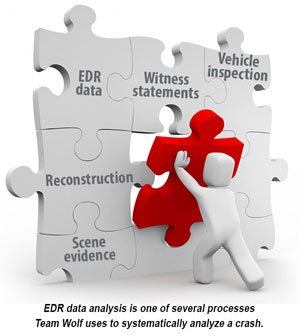 While data from Crash Data Recorders, also known as EDRs (Event Data Recorders), can be significant for accident reconstructionists, it has its limitations. In this report we study several cases where this data could be deceptive without considering all of the available evidence.

Case #1: This example involved a full-size pickup truck that was involved in a parking lot collision with a car. The damage to the pickup was not severe. Its airbags did not deploy and the pickup was driven from the scene. Sometime later the data was extracted from the pickup’s EDR and it showed a single non-deployment event that had occurred while the pickup traveling at more than 50 mph. It also showed the throttle was in the idle position, although the engine rpms were above idle, and the driver did not have the brake applied. Some time passed before the data was extracted and it could not be ascertained that the recorded event occurred on the same ignition cycle as the collision. Because the damage to the vehicles was not consistent with a 50 mph collision and the parking lot was not large enough for the pickup to have accelerated to that speed, it was concluded that the recorded event was not associated with the parking lot collision. The driver of the pickup stated that the pickup had not been involved in any other collisions. The most likely explanation is that the pickup had hit a chuckhole while traveling at highway speed.

Case #2: Wolf staffers investigated an incident where two vehicles collided at an intersection in which the traffic signals were not functioning due to a local power outage. The front of a green compact sedan struck an SUV on the right side causing both vehicles to travel diagonally out of the intersection. The SUV then collided with one corner of a brick home in that quadrant of the intersection. The air bags in the SUV did not deploy either when it was struck on the side or when it struck the building. However, its EDR had recorded data for two non-deployment events. The recorder indicated that there were other non-deployment events, but data from those events was not saved due to lack of storage capacity. Data for the first stored event indicated that it occurred while the vehicle was traveling at 48 mph. The SUV could not have been accelerating from rest to 48 mph in the too-short distance it traveled from the stop bar to the area of impact. On the other hand, if that 48 mph event was associated with the intersection collision then it would be clear evidence that the driver of the SUV did not stop before entering the intersection (as required by law when the traffic signals are not working). Therefore, if only the EDR data were considered, it would appear that the SUV driver was at fault.

A more complete reconstruction based on the rest of the available evidence and a more complete analysis of the EDR data showed that for several reasons, the first recorded non-deployment event (at 48 mph) could not have been associated with being struck by the sedan in the intersection. The data for the second recorded event was a good match with other evidence concerning the later collision with the house. Based on the all the information, we concluded that the SUV’s speed at impact was consistent with the driver stopping and then accelerating into the intersection. It was clear from the reconstruction that the driver of the sedan had not reduced her speed as she entered the intersection.

Case #3: In a case involving a collision at a T-intersection, an initial review of the imaged data and the police report suggested that the driver of a white van traveling on the through street had begun to react approximately 5 seconds prior to impact and had nearly stopped prior to colliding with a late model SUV making a left turn from the side street. The data from the left turning vehicle showed that its driver had made a “rolling stop” and then accelerated as the driver made the left turn. None of the air bags in either vehicle deployed, but both EDRs contained post-impact data for a non-deployment event. A non-deployment event is a crash whose severity exceeds a minimum needed to cause the EDR to create a record, but whose severity is below the threshold needed to command deployment of the air bags.

An investigation at the collision site revealed two important factors that enabled Wolf’s analysts to correctly interpret the data obtained from the EDRs. First, the sight line at the intersection was severely limited by some vegetation which would have made it impossible for the driver of the vehicle on the through street to see the other vehicle 5 seconds before they collided. Second, after clipping the turning vehicle the first vehicle went off the road and over a tall, steep embankment into a creek. With this new information, we concluded that the fall into the creek was the likely non-deployment event that was recovered from the recorder. The collision with the SUV most likely also triggered recording of a non-deployment event, however the data for the initial non-deployment event would have been replaced by data from the second since the EDR in this particular van model was only capable of storing data from the most recent non-deployment event. Working back from where the vehicle came to rest, our reconstruction led to the conclusion that the van had been exceeding the speed limit by about 10 mph and that braking began just a short time before impact occurred.

In summary, while the data from an event recorder may provide valuable information, it should always be considered in conjunction with a thorough analysis of all the other available information. Several members of the Wolf staff have training in the analysis of data from event recorders and can provide you valuable assistance in making sure you see the whole picture.