A group of motorcyclists are traveling westbound along a winding rural highway in southern Indiana. Near the back of the group, one rider began his approach into a right curve. At the same time, an electric utility service truck traveling eastbound entered the opposite side of the curve. The motorcyclist collided with the left side of the truck. The motorcyclist survived but had his left leg detached. The truck driver was uninjured.

Wolf Technical Services was retained by the electric utility to provide reconstruction and demonstrative evidence services. Fortunately, Wolf has all of the personnel and varied expertise required to satisfy the client’s needs. Bill Dickinson, P.E. was the case manager and set out to reconstruct the incident. Tim Maher was tasked to develop the extensive demonstrative evidence communication tools. Joe Hubert handled the field survey and developed the scaled vehicle models to be used on the large print exhibit.

The weather was warm and clear. The road was dry and clear.

• Another motorcyclist following the subject motorcycle stated that the truck’s rear wheels were on the double yellow centerline. If accurate, the truck’s utility mirrors would have extended into the motorcyclist’s lane. He further stated that he was only 30 to 50 feet behind and that they were traveling 25 to 35 mph.

• The truck driver stated that he never left his lane and that he was driving below the speed limit. He further stated that the motorcycle crossed over the centerline before colliding with his truck.

• The truck driver was qualified to drive the truck.

• The truck passed the most recent annual inspection.

• Law enforcement personnel took photos of the scene and vehicles.

• An electric utility supervisor measured and sketched the scrapes and tire marks left from the collision.

• The road was paved over before Wolf could conduct a site investigation. While the new pavement and lane striping were the same, the scrapes and tire mark evidence were lost. Were the measurements taken at the time of the incident accurate?

• The client wanted a high-resolution overhead photo of the site suitable for the exhibits, but none were available. How could they be obtained?

• One of the requested exhibits was a very large scaled print exhibit with scaled vehicle models that testifiers could move. There were no commercially available vehicle models that matched the incident vehicles. How could accurate models be developed?

• The client wanted video graphics (also known as trial animations) that were as realistic and compelling as possible. Traditional computer-generated movies were not adequate. What solution would work best?

Bill Dickinson analyzed the available evidence, conducted a site inspection, and inspected the motorcycle and an exemplar truck. Based upon the evidence and his analysis he came to several conclusions. 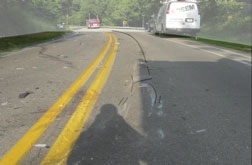 The scrapes at the point of impact and the truck’s post-impact tire marks were measured and located within the truck’s eastbound lane by a person who was not formally trained for the task. The site photos generally correspond to the measured location. However, Bill could not rely on the measurements without independent verification. By utilizing the science of photogrammetry, he was able to use the photos and the survey data to determine the correct location and dimensions of the marks. This data was used for his subsequent analysis, as well as for all of the exhibits.
evidence

Based upon the relative locations and the closing speeds of the vehicles, Bill determined that the witness only had between .2 and .4 seconds to see what he reported to be the truck’s rear wheels on the centerline. During this time, the witness also had to maneuver his motorcycle and avoid his crashing companion. This analysis provided our client useful information for doubting the credibility of the witness statements. 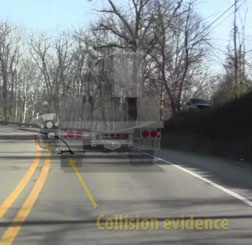 Transparent image of truck and motorcycle overlaid on an image of the collision scene evidence show relationship of vehicles to centerline at impact. 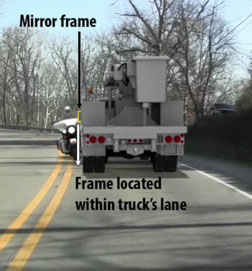 To obtain the needed aerial photo, the electric utility provided a boom truck and operator to lift Tim Maher sixty feet above the site where he took several photos from different positions. Back at the office, and using Joe’s site survey data, he accurately blended multiple photos into one seamless aerial image that was then used for the exhibits.

The client asked for a large print of the aerial exhibit along with matching vehicle models. The final mounted print is 15 feet wide by 5 feet high (stop by our offices to see it displayed). Joe Hubert prepared the models. Because there were no commercially available models that matched, Joe combined closely matching models with parts printed using our 3D printer along with his custom crafted components. The results were accurate and realistic representations of the original vehicles. 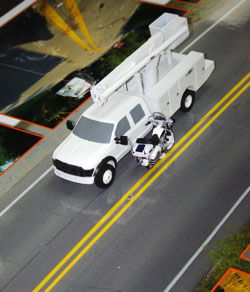 Image of the large scene exhibit.

Finally, to provide the client with the highest realism in trial animations, Tim developed a series of HyperVideo portrayals. He worked under the direction of Bill while incorporating the site survey and reconstruction data to ensure the portrayals faithfully represented Bill’s opinions. These video graphics blend site video with realistic computer-generated vehicles and provide a robust communication tool to support Bill’s testimony. A collection of the videos for this case can be seen on our YouTube channel.

Our work significantly facilitated our client’s negotiation of a very favorable settlement.